As the years roll by, it seems that drought conditions are becoming normal, therefore we must become more water conscious. Water conservation is no accident, it is the responsibility of each and every property owner. With that in mind, here are a few recommendations.n

Plants should have a 2”-4” thick cover of fine textured mulch such as triple shredded Hardwood, cedar or other premium shredded mulches.  These types of mulch do a better job of conserving moisture than course textured mulches.

Always have a ring of mulch around trees or shrubs that are planted in a lawn area.  The root system usually extends to the drip line of the tree or shrub foliage canopy.  This mulch ring conserves moisture and greatly reduces competition for water from weeds.  It will prevent damage to the tree trunk from mowers or string trimmers used during lawn maintenance operations. Mulch also provides continuous nutrients needed by plants as it decomposes.

Use Drip line or “low pressure, low volume” for irrigating your landscape beds. This irrigation applies water directly to the base or roots of plants. These drip lines also reduce the amount of water that can be wasted by evaporation when it’s hot like today. These systems are ideal for watering individual plants and smaller landscape areas slowly and precisely.

Check the soil. In your landscaping, check areas around your plants by removing some mulch at the edge of the plants foliage canopy to see if it’s dry or moist. You can also check your lawn soil as well. Remember we water soil not plants and grass to keep them healthy and green.

Michigan is experiencing extremely high temps and is on some form of drought right now. I have heard that lake levels are high right now but that may change. It’s a reminder that water is a valuable resource, especially in our state. Since July is Smart Irrigation Month, consider using technology to improve efficient water use, which saves money and protects this important resource. The Irrigation Association offers simple tips in using technology to improve efficient water use while keeping your landscape healthy:

Take the guesswork out of irrigation by upgrading to a smart controllers. Weather- and soil moisture- based controllers automatically adjust the watering schedule based on conditions at your location.

Drip or “low pressure, low volume” irrigation applies water directly to the base or roots of plants. These systems are ideal for watering individual plants and smaller landscape areas slowly and precisely.

Inspect your sprinkler heads regularly to make sure they are not obstructed or watering onto pavement.

Save on your next upgrade

Many water utilities offer rebates for certain water-efficient products. Before upgrading to your new system, consult with your local water provider to see if they offer rebates in your area. We hope you enjoy some quality time in your landscape this Independence Day weekend.

Do to the Covid-19 Stay at home Executive Order We have not been able to work and haven’t received any support from the Governor or the federal Govt., through the SBA or bank.

We have some announcements
to make as we prepare for the upcoming season.
We are living in unprecedented times and there are still many questions that should be
asked but it appears we will have to wait for more courageous people to do that.
My point is to inform you of our plans and how we hope they will play out. The current Executive Order was extended until 4-30-20.
That means we should be able to start work on 5-1-20.
That is our plan and intention. We are aware of other municipalities not enforcing the Executive Order but Troy has made a statement that they will enforce the EO and any company caught working at this time will face steep penalties, fines, criminal charges and loss of license.
So

We, like many others, are not considered essential and therefore are unable to be out performing any of our normal tasks we are usually doing like, Spring Cleanups and Areations, even mowing now, at this time at your property. We hope this will change soon. We appreciate the patience and support of our customers at this time and as soon as we are able, we will be out and get the work done. We will be doing Cleanups probably at the same time we need to be mowing. So if we arrive to mow but haven’t done your cleanup yet and you paid we will still be there soon after to get the cleanups done.

Be safe, Follow the Guidelines and remember “this to shall pass”.
We are in this together.

Thank You!
Have a Great Day!
Harry Mazei
Great Lawns
www.GreatLawns.net
Office 248-797-1494
“Be always at war with your vices, at peace with your neighbors, and let each New Year find you a better man/woman”

Click and watch how one old guy Cleans a driveway, walks and the porch in 7 minutes in 4″ of snow. 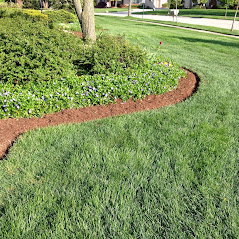 We built this patio at the end of the season last year and added another extension this spring.

A relatively new, pest has found its way to North America, and has now found a home in the mid-west.  Both species of European Crane Fly (T. Paludosa) and (T. Olecera) were detected in Michigan in 2005.  The larvae is called a leather jacket and can be problematic in any turf.  The larvae are dependent upon moist soil conditions, mild winter sand wet cool summers to survive.  They are favored in areas of the lawn that have heavy thatch build up and poor drainage.  The difference between the two species, T. paludosa has a one year life cycle and T. Oleracea has a two year life cycle.

What will I see?

You will see yellow spots on the grass blades, bare patches, and direct injury to the lawn.  The injury is because of the disruption of the root zone, caused by the leather jackets, the adults feed on the crown and grass blades.  Most damage occurs from early to late spring and again in early to late fall.

How did European Crane Fly end up in my yard?

Both species of Crane Fly originated from Europe, and were first detected in North America {Canada}, several years ago, and now have migrated to the United States and have now found a home in Michigan.

How can I control the problem?

The best method of treating European Crane Fly is with a dual insecticide that treats both surface and sub-surface insects.  The European Crane fly’s life cycle is similar to that of a grub, this is why a dual insecticide is necessary, to control both the surface feeding adults, and the root feeding larvae; two treatments a year (one in spring and again in the fall), for 2 years is needed to control this exotic pest.

It is difficult to distinguish between the two species of European Crane Fly, and our own species of crane fly indigenous to North America. This is why a two year treatment plan is recommended, so that both the one year and two year cycles of each species are controlled.

Call if you think you might have them in your lawn.